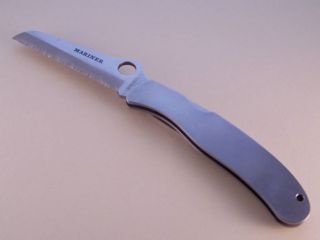 The Mariner was the second model introduced by Spyderco. It was introduced in 1982 and remained in production until 1998. As its name implies, the Mariner was intended for those who work or play in a marine environment. It's relatively blunt pointed Sheepfoot blade is less likely to unintentionally puncture something while being used on a pitching, rolling vessel or if dropped. The Mariner was the first Spyderco to feature a serrated edge. Sal felt the combination of serrations and the sharply pointed blade of the C01 Worker, Spyderco's first model, might be seen as too agressive looking.

The Mariner appeared in Spyderco catalogs and other advertising material from its introduction in 1982 until 1998. Catalogs can be found here

History, mentionings from the forums, etc.

The earliest Mariners had flat slab handles and no drying vent. They were available in both serrated and plain edge, and in both RH and LH versions. There were no steel markings but, according to The Spyderco story, the blades were AUS-8. A special plain edged variant commonly referred to as the Paramedic followed. It too had flat slab handles, no drying vent, and no steel markings. But it also featured a smaller lanyard hole, a thinner handle slab on the side opposite the clip and, again according to The Spyderco story, used GIN-1 blade steel. Like the Mariner, they were made in both LH an RH versions. At some point during this era, Spyderco began to experiment with coatings and produced a batch of approximately 50 serrated edge and what Sal Glesser described as "a handful" of plain edge Mariners with a black coating on both the handle and blade.

Some time thereafter, the Mariner was re-designed. The perimeter of the handle was beveled and a drying vent added to both sides of the handle. As with the earlier version, these were available in both left and right handed, with plain or serrated edges. Again like their predecessors, the earliest specimens of these, have no steel markings. Over the years, later production runs were marked G-2, GIN-1, and finally ATS-55.

The Mariner has also spawned several other models. The C14 Rescue, C45 Rescue Jr., C89 Atlantic Salt, C118 Saver Salt, 3001 Mini Mariner and LBKII Sheepsfoot Ladybug can all trace their heritage back to the Mariner. The C120 Mariner Salt, released in 2008, is an updated version of the C02 Mariner featuring an H-1 blade and rustproof steel handle and hardware.

Variations of the C02 Mariner

The C02 Mariner was made in Seki City, Japan and may still be produced there for the Japanese market.

It is worth noting that "C" prefix SKU numbers were introduced at a later date. As with other models of that era, the original Mariners were numbered "1002" with a suffix which indicated edge type and handedness.

Rarest variation is the black coated PE 1st Generation Mariner. However, the Paramedic seems to be the version most favored by collectors.

Questions regarding collecting the C02 Mariner

Typical measurements (mm and grams) of the C02 Mariner and Paramedic:

Typical measurements (Inches and ounces) of the C02 Mariner and Paramedic: