The FB14 Swick was designed by Sal Glesser and the concept grew out of the FB08 Spot model, which also incorporates an oversized Fred Perrin index finger hole. It's name is a combination of "Swift" and "quick".

The FB14 Swick has not appeared in the Spyderco catalog.

Swift & Quick: The 2009 Swick is a limited 500 piece run at the request of customers who loved the original Swick which sold and was eventually discontinued several years ago. The revival, like the original, is designed by Sal Glesser. Its shape, and large index finger hole are inspired by the French knife designer Fred Perrin. Palm-sized, the fixed-blade's skeletal handle comes without handle scales. This allows the user to create/add a personalized handle or cord wrap. Unique to the model is the index finger hole, a Perrin feature. Placing the index finger through the hole keeps the knife retained in grip, freeing up fingertips to grasp while holding the knife in a cut-ready position. Made from a solid piece of tumble-finished CPM-S30V stainless steel the blade is a Wharncliffe shape, fully-flat ground with The Spyderco Trademark Round Hole. The Swick does not come with a sheath, leaving carry options and sheath design open for the decision and preference of its owner.

Spyderco often revives a previously discontinued model, offers it with different materials or a design alteration and makes it available again for a short time or in a limited number. Our latest is the Swick2.

Swift & Quick: The original Spyderco Swick was developed for fast deployment and lightweight carry. The latest revival holds true to the original but with CPM S30V blade steel. The Swick2 is a limited 600 piece run with design elements from both SpydercoG??s Sal Glesser and French knife designer Fred Perrin. Perrin, best known for adding an over-sized index finger hole to his fixed blades, uses this on the Swick. Once the finger is through the hole, the knife is safely retained in the closed hand until the finger is removed. This frees up the fingertips for using/grasping while still holding the knife in a cut-ready position.

Palm-sized, the fixed-bladeG??s handle is skeletal without scales allowing the user to create/add a personalized handle or cord wrap. Made of a solid piece of tumbled-finished CPM S30V stainless steel the blade has a Leaf-shape, fully-flat ground with The Spyderco Round Trademark Hole.

The Swick is sold without a sheath or scales leaving carry options and sheath design up to the preference of its owner.

The original Swick was developed for fast deployment, lightweight carry, and an incredibly secure ergonomic grip. The new Swick3 is the result of Spyderco’s Constant Quality Improvement (C.Q.I.) process and provides an outstanding grip while offering even greater versatility and strength. Designed by Sal Glesser, the Swick series features a large index-finger hole—a feature developed by custom knifemaker Fred Perrin. Placing your index finger through the hole locks the knife securely into your grip and greatly reduces the possibility of it being dropped or dislodged during use. It also allows you to keep the knife in your hand while freeing your fingers to perform other tasks. The Swick3’s enhanced finger-hole design is larger and is complemented by jimping on the adjacent top and bottom surfaces of the tang. These refined ergonomics make the Swick3 even more versatile and secure during use.

The Swick3 is crafted from a solid piece of premium CPM S30V steel and is skeletonized to reduce weight without sacrificing strength. The blade features a full-flat-ground wharncliffe profile and a handsome tumbled finish. Although it is perfectly functional as is, the Swick3 now features pin holes for easy attachment of handle scales or paracord wrap. It is purposely sold without a sheath or scales to allow you to customize it to meet your personal needs. Made in the USA from premium US materials, the Swick3 proudly features Spyderco’s Trademark Round Hole.

The FB14 Swick is made in Golden, Colorado and features:

There were 9 prototypes made with an engraving on the blade[3]:

There were also a few Rescue prototypes made with an engraving on the blade:[4]

Questions regarding collecting the FB14

Measurements (mm and grams) of the FB14 Swick:

Measurements (inches and ounces) of the FB14 Swick: 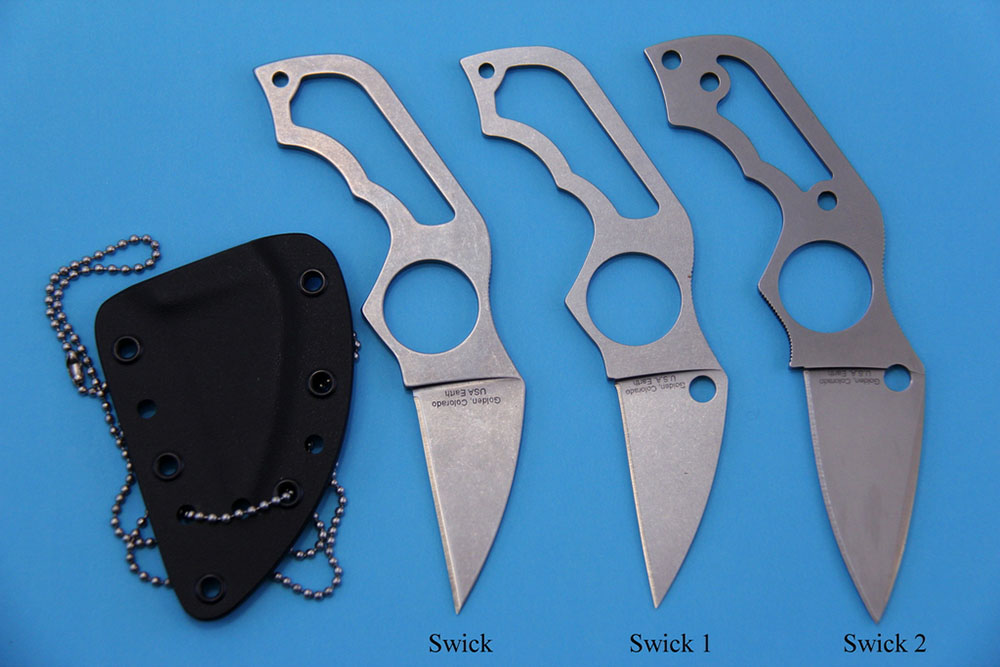