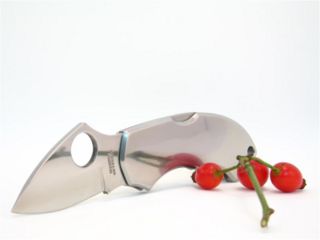 The C61 Pegasus is a small knife with a short blade designed for travel by air and business carry. It can be viewed as a descendant of the C09 CoPilot and shares very similar design goals.

A very similar model designed and introduced in parallel to the Pegasus exists: The C62 Navigator has a slightly different and larger blade shape and a G-10 handle.

The C61 Pegasus appeared in the following catalogs:

The Pegasus bears the distinction of beeing the first model to have a CX- Sku assigned to it, before becoming a regular production item.

The Pegasus is one of the lesser known Spyderco models and in comparison to many other models is only discussed rarely on the forums.

The C61 Pegasus is made in Seki-City, Japan.

At least one prototype of a variation with CF handles exists.

Questions regarding collecting the C61

Measurements (mm and grams) of the C61 Pegasus:

Measurements (inches and ounces) of the C61 Pegasus: