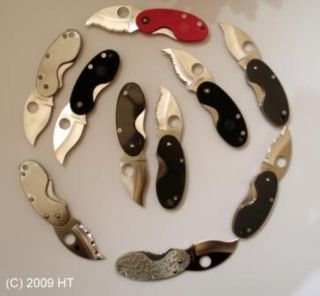 A selection of production Crickets‎

The C29 Cricket is a compact, oval shaped knife with a reverse "S" shaped blade introduced in 1994. In the course of it's long history several different handle materials and blade steels were used.

The C29 Cricket appeared in the following catalogs (older, newer):

"Thin is in. We've made our long-favored Cricket model even thinner by integrating the handle and lock. Custom knifemaker Chris Reeve invented the idea of making a linerlock's liner out of backside scale of the handle. In doing this, thickness and bulk are shaved off the handle for an ultra-thin folder that locks up confidently with fewer moving lock parts.

We've incorporated this design into a rounded handle with a reverse "S" shaped blade. The distinctive blade shape curves into a keen precision tip for intricate/detailed cutting. Made of VG-10 stainless steel, the blade is hollow-ground and when folded closed creates a rounded package that rides nearly invisibly in the pocket. The pocket clip carries right-handed tip-down but also attaches to a tie or makes a fashionable money clip. Create your own one of a kind Cricket with engraving, corporate logos or a personal message."[1]

All Cricket variations are made in Seki-City, Japan and have a reverse "S" shaped, hollow-ground blade. The C29 and C29PET have an Integral Lock, all other variations have a Walker Liner Lock locking mechanism.

The Pink and rainvow anodized Crickets are rare versions. The PE CF is also very collectible. Of all the different versions, the YY is believed to be the absolutely most collectible.

Questions regarding collecting the C29

Some interesting questions we are looking for an answer to: See ? above.

Measurements (mm and grams) of the C29:

Measurements (inches and ounces) of the C29: 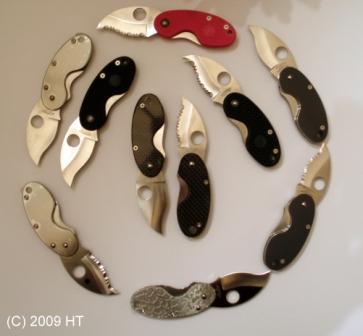 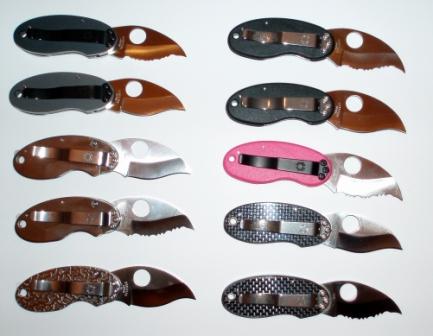 Also see the Cricket Pics! or the C29 Cricket pic's thread on the Spyderco forum.