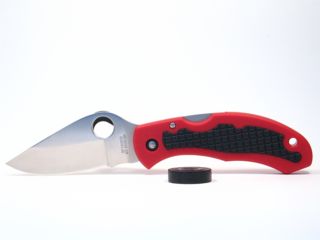 The C26 Snap-It appeared in.

Discussion on the Spyderco forums, with pictures of The Deacon's orange EMT version.

Was voted the 1993 Blade magazine "Overall Knife of the Year."

The prototype originally had the snap on the back end, opposite the pivot, but was switched when it was discovered that this forced the user to rotate the knife 180 degrees before opening it, which could present a problem in an emergency.

The C26 is made in Seki-City, Japan and has

The orange handled EMT version is highly sought after. There also appears to have been a variation of the regular version, but with a yellow handle with black inserts, made for Snow Peak.

Questions regarding collecting the C26

Measurements (mm and grams) of the C26 Snap-It:

Measurements (inches and ounces) of the C26 Snap-It: