The C168 Battlestation by Alexandru Diaconesc (Dialex) was introduced in 2014 and is Alex's third collaboration with Spyderco.

The C168 Battlestation appears in the following catalogs:

Alexandru Diaconescu, better known to the knife community as “Dialex,” is an economist, a talented graphic designer, and an information specialist for the Romanian police. He is also a lifelong knife enthusiast with a deep passion for Spyderco knives. The Battlestation is his third collaboration with Spyderco and represents his concept of a personal-defense knife.

The Battlestation is an extremely stout folding knife built on a framework of solid stainless steel handle liners. They are capped by textured G-10 scales that feature meticulously machined relief cuts for easy access to the blade’s Trademark Round Hole™ when opening the knife. The blade of the Battlestation is a unique hybrid profile that features a slightly curved, Americanized tanto-style point and a strong saber-ground PlainEdge™ cutting edge. Ground from VG-10 stainless steel, it also features twin fullers (grooves) in the blade flats and a beveled swedge at the tip to ensure a strong but capable point. An index-finger choil at the heel of the blade allows the user to choke up for extra control and features carefully machined jimping (textured grooves) for extra grip security. For swift, one-handed opening, the blade includes a 13mm Trademark Round Hole that also unmistakably identifies the Battlestation as a Spyderco design. A reversible wire clip attached to the butt end of the handle supports left or right-side tip-up carry and complements all the other features of the knife to make its carry and operation completely ambidextrous.

Questions regarding collecting the C168

Measurements (mm and grams) of the C168 Battlestation:

Measurements (inches and ounces) of the C168 Battlestation: 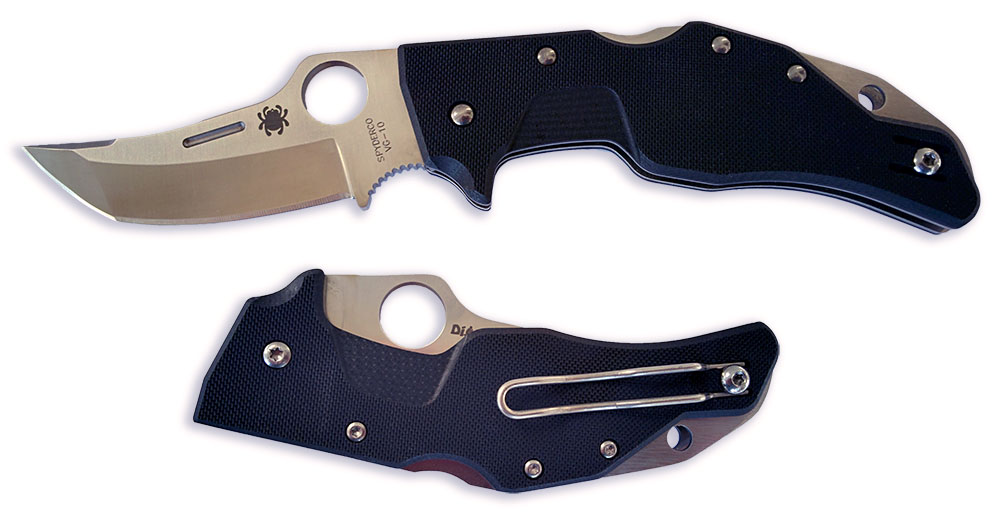