The C152 Chaparral is a project model with several variations using the same pattern and blade steel, but featuring different handle materials, allowing Spyderco to "push the envelope of materials and craftsmanship in the expression of a gentleman's folding knife."[1]. The Chaparral lineup is part of the Prestige series.

The C152 Chaparral appeared in the following catalogs:

"Chaparral is a shrub native to the Western United States with the unique ability to perennially survive, revive and regenerate after being destroyed by drought or fire. Like a season it returns year after year. It's also what Spyderco calls a new and continuing series of gentlemen's folders.

Mid-sized Chaparral folders will have identical blade and handle profiles but showcase variant handle materials. Handle options will be chosen for their elegant appearance and functional utility with a focus directed at making the Chaparral series unique as well as a serious contender in the gent's knife genre. Possibly Spyderco's thinnest, lightest mid-sized CLIPIT yet, the debut Chaparral has a carbon fiber/G-10 laminate handle with a mid-positioned back lock and screw-together construction.

Attached to the ultra-slim handle, a left-right, tip-up clip arranges the knife deeply inside a pocket. Crucible Steel Inc. of New York produces the CPM S30V powdered steel used for the leaf-shaped blade. The blade is ground full-flat and offered PlainEdged for the best available cutting performance with non-skid jimping located at both the spine and choil." The C152CF Chaparral in Spyderco's online catalog. The C152TI Chaparral in Spyderco's online catalog.

The C152 Chaparral is made in Taiwan and features a Back Lock and a leaf-shaped blade.

Questions regarding collecting the C152

Questions with an answer: Q: Why did the Chaparral get changed from S30V to XHP steel? A: The Chaparral line had always been intended to come in XHP, but since Spyderco was unable to secure sufficient quantities in time for the release of the CF Chaparral, they instead released it in S30V. Once sufficient supplies of CTS-XHP were available, they switched it over.

Measurements (mm and grams) of the C152 Chaparral:

Measurements (inches and ounces) of the C152 Chaparral: 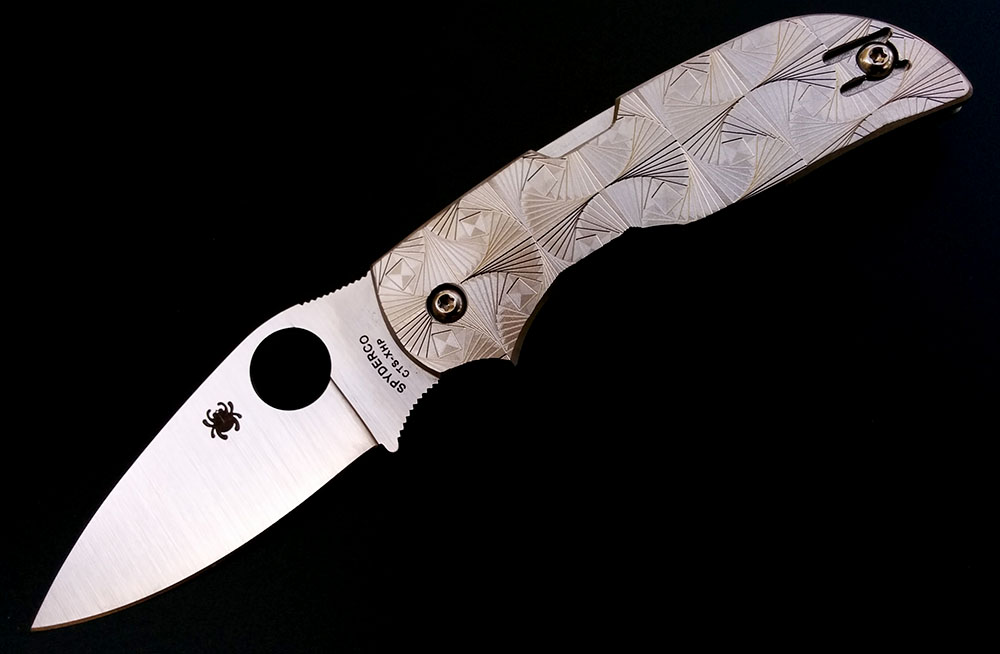