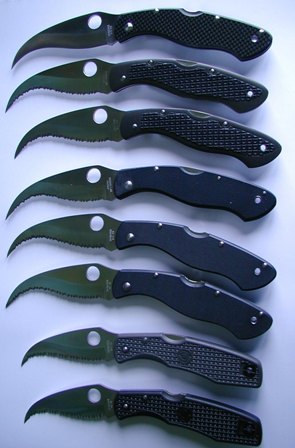 The Civilian is a knife with special qualities. It’s a collectors dream with all it’s variations, different steels, etc. Originally developed for self-defence the civilian is both beautiful with it’s Reverse "S" Blade and very useful if you have self-defence needs but no or little formal training. The C12 SKU is shared with it's little FRN Brother the Matriarch, which is also dealt with in this article.

A thread about the Matriarch on the Spyderco forums [6]

"In the 1990s Spyderco was approached by a specialized branch of U.S. law enforcement about making a knife for their undercover agents. These plain-clothes LEOs found themselves in situations where they often could not carry a firearm but carrying a knife was not a problem. Most had no formal training in self-defense tactics or MBC but as a last resort could use a blade to protect or extricate themselves from a life-threatening situation. This was how the Civilian model came to be. The Civilian has a patented reverse "S" blade that's intended to be used like an oversized claw. The tip is ground to an ultra-thin profile. Deeply curved and full at the belly, the VG-10 hollow-ground blade excels in slicing and is available fully SpyderEdged. Because of its distinctly specialized features it is not intended or designed for general utility or everyday use. Curved in all the right places for ergonomic use and retention of the knife, the handle is black G-10. Mounted for tip-down carry with a custom curved black clip, the knife rides deeply and unobtrusively in a pocket. One of the most specialized CLIPITS in the Spyderco line-up, the Civilian is available in limited quantities."[8]

The Spyderco C12 Civilian and Matriarch is a Spyderco that has been made in several variations. The carbon fiber handled Civilian appears in many forms with pouch or box, numbered and unnumbered. In addition, there's also a slight difference in how the handles are put together on the CF variants. Some are all screw construction and some are partially screwed and pinned. It has not been possible to figure out why that is or where the change occurred. There seems to be no system to which is what. These are not listed as variants in the list here due to that.

All variations are made Seki City, Japan and have

The Matriarch was initially made by request from the South African importer as a small, light and affordable knife for women for self-defence. It is slightly smaller than the Civilian. The demand grew so strong in the US that there was a sprint run of grey Matriarch's before it came into regular production for the US market as well due to growing demand. The Matriarch was brought back in 2012, utilizing the newer Endura 4 handle design.

Variations of the Matriarch 2

The C12S in bare aluminum or the C12GP in G10 are the two variations believed to be most collectible Civilians. The Carbon fiber Civilians are of course collectors items as well.

The C12SGY grey FRN Matriarch is the one believed to be the most collectible Matriarch, although there might be few of the ATS-55 Black matriarch in circulation as well.