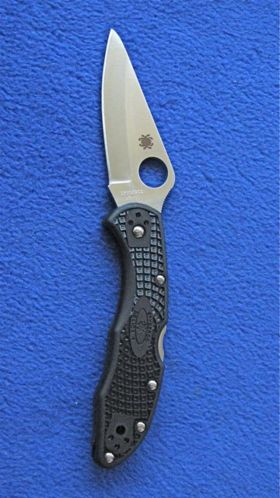 Until about 1992 Spyderco knives were not marked with the steel used. This was because Hitachi had licensed the Gingami 1 name to another company already and wanted it to be exclusive. The G-2 stamp[1] on the blade was then used till 1994. G-2 was a designation that Spyderco invented, meaning "Good s#it also"[2]. In 1994, the steel remained the same, but the marking was changed to GIN-1, as Spyderco was able to get permission from the original company to use that name.

At one time, as shortage of GIN-1/G-2 caused the maker to order the replacement AUS-10 which, also being out of stock, resulted in AUS-8 being used, though the blades were marked G-2.

Initially a thin integral FRN clip was used, which was later changed to a wider one. In a less visible way, actually a total of 6 different clips exist: "The 1st generation, with the molded clip actually went through 6 modifications to the mold, but they were minor changes to the clip mostly."[3]

Sal Glesser designed the original 1990 Delica. Today's design updates he also designs together with Eric and Peter as a team[6].

Historical note: The 1991 Swedish Mount Everest expedition used C11SBL as their expedition knife. These knives were etched with the text: EVEREST -91 on the blade. A total of 43 knives were made with this etching, the first of which was presented to the Swedish King in a box made of Bog oak. [7]

"In 1990 Spyderco shook things up by introducing two knives, the Delica and Endura. First of their kind on the market, both folders opened up the knife market to lightweight performance, one-hand open pocketknives that just about everyone could afford. They settled as Spyderco’s top two bestsellers and their improvement hasn’t slowed since. Refinement has been so ongoing and continual Spyderco tagged the updating/upgrading process with the term CQI- Constant Quality Improvement. During the Endura and Delica’s CQI journey Spyderco tweaked ergonomics, refined blade steels and fine-tuned their performance countless times. They are an evolutionary work in progress and the next level is here with the new Endura4 and Delica4. Both models now have screw construction making cleaning and adjusting easier. The fiberglass reinforced nylon handles come molded with Bi-Directional Texturing® for preferred traction and improved ergonomics. Inside the handle dual skeletonized stainless steel liners make the knife stronger without adding weight and make an anchor for all external and internal components to attach through adding sturdiness and rigidity. Their VG-10 blades are flat saber-ground with a stronger tip and larger 13mm opening hole. Added to the blade’s spine is slip resistant jimping. Phosphor bronze washers smooth out the open/close action and the clip is upgraded to a four-way tip-up, tip-down, left- or right-handed clip." [8]

C11KIT: The C11 SKU is also used for the C11KIT internal replacement parts kit for the FRN Delica 4 Lightweights. This kit was introduced in 2008.

One of the rarest versions is the Tom Sachs NASA Edition (100 pieces), which uses the white Delica and has a red NASA logo on the center of the handle and Sachs' signature engraved on the blade. Made in 2007 in conjunction with Tom Sachs: Space Program at Gagosian Gallery, Beverly Hills.