The C22 Michael Walker appears in the following catalogs:

Extracted from a post[1] by "sal" on the Spyderco Forum:

The Carbon fiber came from the Sauber F1 race team.
The knife was built for us by HP Klotzli.
My wife, Gail carries one as an EDC.
..."

Extracted from another post[2] by "sal" on the Spyderco Forum:

"...
HP Klotzli came up with the idea for a Walker/Spyderco collaboration. He also swanted to build it. It was his idea to
use carbon fiber and he worked with Michael to develop manufacturing methods. I worked with Michael on the design.
Michael is quite a genius.

HP made the knives for Spyderco. We made the ATS-34 blades in Golden and shipped them to Switzerland. He
developed the carbon fiber and titanium mfg methods. HP does great work.

We thought about working with HP to make a slightly larger version of the C22 Walker. His wife Beah, had drawn a
beautiful larger version by incrementally extending the pattern.
..."

The C22 features a Walker Liner Lock and a spear point shaped blade.

The C22 with CF handles and titanium liners were made in Switzerland by Klotzli. Spyderco individually numbered them (exceptions?). Two CF handle types exist:

Earlier produced C22s with CF have glossy (shiny, polished) handles and later ones matte. There are also two types of engravings on the blade: The "Klötzli" put on earlier blades was later replaced by "Swiss Made". There also exist C22CF blades with lasered names and number instead of engraved (in the [1500,1699] range?). C22s with an engraved number in the 1700-1799 range have been reported.

All other C22 variations (incl. CX06) were made in Seki-City, Japan.

The low numbered early ones or the later ones are believed to be the most collectible variations, although one might say all C22's are collectible for several reasons as listed above!

Questions regarding collecting the C22

Measurements (mm and grams) of the C22 Michael Walker:

Measurements (inches and ounces) of the C22 Michael Walker:

4 variations of the C22 (and/or C37 Michael Walker Lightweight ) model From the top: 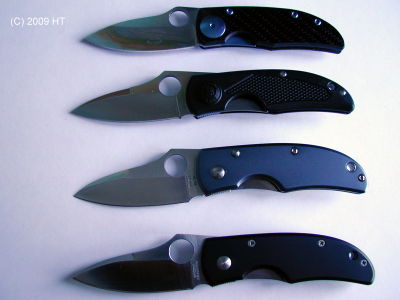 The C22CFP is distributed in a black pouch: 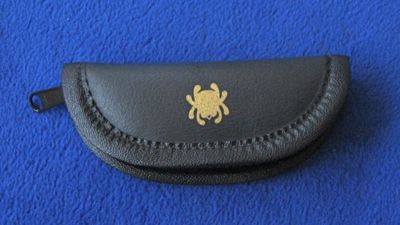