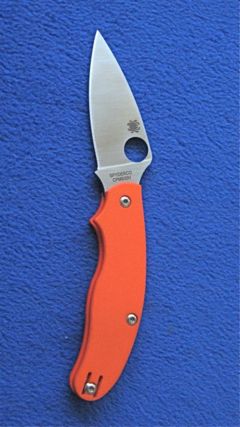 The C94 UK Penknife was introduced in late 2004. It features a pocket clip and a non-locking, leaf shaped blade that is held open with a Notch Joint (aka SlipIt). Variations with different handle colors were introduced in 2008.

For Denmark, a modified variant with a shorter blade and a non-functional opening hole, the C94 DK Penknife, was introduced in 2005.

As a natural continuation of the UK Penknife the shorter C127 Urban was released in 2008.

In 2009 a variation of the C94 UK Penknife featuring a drop point blade was introduced.

The UK Penknife is part of the Non-Locking series.

It then appeared in all annual Spyderco product catalogs since 2007 (older, newer).

"The knife may be man’s oldest tool but today it is governed by different carry restrictions in nearly every country in the world. It seems: “if man makes it, he must legislate it”. This is particularly true regarding pocketknives in the United Kingdom where legal guidelines govern the size and function of all pocketknives carried in public. One of these parameters is that folding knives not have blades that lock open. Spyderco addressed this by developing a non-locking folder expressly for the UK called the UK Penknife. The blade is held open by a notched-joint at the knife’s pivot. When closing the blade the notch produces roughly twenty-pounds of resistance, functionally similar to traditional slip-joint penknives. To achieve a heightened sense of control and comfort, Spyderco designers added a deep finger choil positioning the index finger on the bottom of the blade directly under the thumb. This lets you choke up nearer the cutting edge with comfort and dexterity. The handle is black G-10 with a tension-wire clip that carries deeply in the pocket, tip-up and either left or right-handed. The CPMS30V laser cut blade is available PlainEdged and ground flat on both sides."[1]

All C94 variations are made in Golden, Colorado, U.S.A. and have

99(?) of the 500 UK Penknives that initially went to the UK are engraved with "UK Pen-Knife design team" on the spine. These can be considered the rarest and for some collectors therefore most collectible variations.

Questions regarding collecting the C94

Measurements (mm and grams) of the C94 Penknife:

Measurements (inches and ounces) of the C94 Penknife: