Difference between revisions of "C35 Q"

C35 "Q" was created to be very lightweight. The scales and blade are "skeletonized". Simple to construct and easy to have different blades designs. Introduced in 1996 it was awarded Blade magazine's knife of the year. Production started in 1997 with the Spyderco Bug in the blade and continued for a few years. The initial name for the Q was the Silhouette.

Built to be very lightweight (34g or 1.2 oz) the Q also brought a small and rather inexpensive platform for customization and since many blade designs were possible, it would become a marketing tool for companies. It would also be used to recognize employees for various companies and given away as prizes and the such.

The Q was designed to be as simple as possible, with the final design using only 8 parts (9 parts in the 2nd gen):

Initially the FRN handle was built in a 'sculpted' design. Where the scale was a little wider in the middle and narrower at the top and bottom. The next generation of handle the sides were flat. Also an additional pin was added at the top of the scales near the lock. It is unknown exactly how many variations of blade design were created. There exists pictures for more than 50 blade variables. Many were done with different color handles. Quantities also varied greatly between variations. From Prototypes where 1 or 2 exist, very small quantities of 25 up to thousands for companies like REI and EMS. SE is the most common edge although PE was available as requested by the companies ordering them. They can vary for each company, some varieties included both edge configurations. CE was also available, but rarely seen on the regular blade. A Sheepfoot Blade was available on two versions (New York Custom Knife Show and Wilderness Medicine Outfitters). A Sheepfoot Blade was done in a solid blade (a blade without any cutouts) and made in various colors, but not for general sale. The C35 Q was available in the following FRN colors: Black, Red, Green, Grey and Blue. Below we've tried to list the different variations as far as we know. If you know of others, please let us know here

Special thanks to Spyderco forum members Chris (boxer93) for maintaining a Q website and Paul (The Deacon) for his Q page, as well as David Jung (spyderwa?) for his site and Dan (Qcrazy) for all his informative emails and pictures.

With the C35 Q it's more a question of which variation is NOT very collectable. Considering the amount of people collecting the Q and how few was made of some of them, it's impossible to say which is the most collectible. The least collectible seems to be the regular Bug in blade Q and the one with HK in the blade. Both of these appear pretty often and never really bring the really high prices. Most of the others seems to command a premium whenever they appear for sale.

Questions regarding collecting the C35 Q 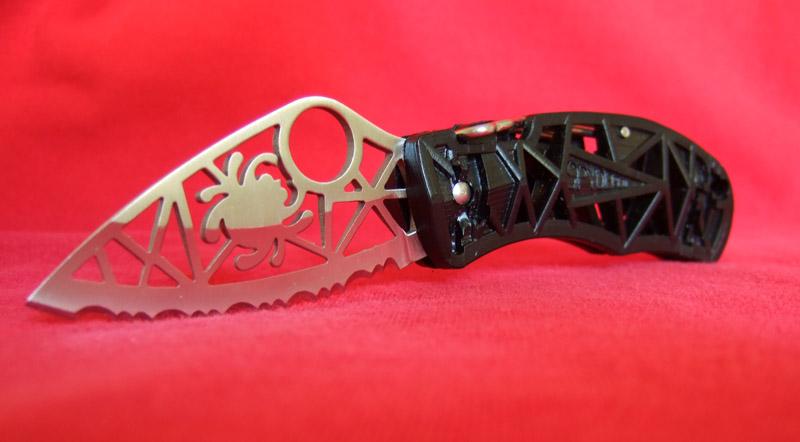